Is your B2B company at a social media crossroads? 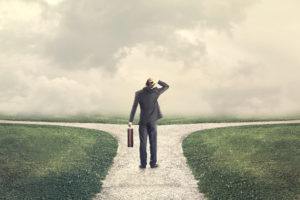 It’s hard to believe. Here we are in 2018, over a decade since Facebook and Twitter made their appearance, and many B2B marketing departments are still not sure if social media belongs in their online marketing plan.

Many of these companies have tried social media. Sort of.

Some have farmed out their social media marketing to college-aged interns, while others have piled social media management onto already overwhelmed traditional marketing departments. But in most cases, these “tries” have amounted to little more than sending out a stream of self-promoting posts and tweets, with lukewarm results – or no results at all. Is it any surprise that many business-to-business companies are ready to give up on social media entirely?

That would be a shame. 68% of adults in the U.S. are on Facebook, more than 450 million users are registered on LinkedIn, and YouTube now reaches more 18-49-year-olds than ANY cable network. That makes social media a powerful tool for connecting with prospects, boosting brand awareness and building customer loyalty.

Before your company chooses the path of silence (or the path of clueless self-promotion) on today’s most powerful and broad-reaching marketing platforms, consider these five factors that could turn your social media marketing efforts around.

1) Did you define your market?

Social media comes all shapes and sizes. And within each platform, there are opportunities to target messaging to the right pool of prospects. Simply posting on a Facebook wall or sending out random videos on Snapchat is like advertising in random magazines and newspapers – odds are your message is never reaching the people you need to attract. Picking the right social media platforms…the ones where your prospects are likely to spend time…and targeting your messages to them is step one alone the right path in SMM.

2) Did you define KPIs? And track them?

Marketing without measurement is, well, not really marketing. You already know that. But that’s what happens all too often in social media campaigns. Somehow the rules of good marketing are overlooked. There are no goals, no KPIs. And without those, it’s impossible to know if your efforts are a success, or if you need to move in a different direction with messaging, platforms or offers.

3) Did you designate certain people to manage social media? And are they SMM-savvy?

Social media marketing, especially during a launch of new pages, isn’t something that can be done on the side and still done well. Because many B2B companies are ambivalent about social media, they try to make it an add-on to an already busy person’s responsibilities. To add to the challenge, many of those tasked with SMM, especially in larger, established companies, aren’t savvy about social media at all. Or they’re good with personal use of social media, but haven’t a clue how to use it for business purposes. For example, a young intern who doesn’t yet understand the company business objectives, customer base or what customer hot buttons Sale uses which lead to a sale.

4) Did you give your social media people the freedom they need?

Social media is all about the timely post, the instant response. In many B2B companies, decades of approval processes and stakeholder input meetings makes the idea of on-the-fly interaction downright terrifying. Of course, in some industries such as medical devices, pharmaceuticals, and law, there are restrictions on what can and cannot be said publicly. But in most cases, a well-trained social media pro can handle ordinary postings, comments, likes and shares without running afoul of industry regulations. Requiring pre-approval for each and every post or comment is a recipe for disaster in the fast-moving world of social media.

This is the big one. The reason most businesses give up on social media.

But social media isn’t a hose. It’s a conversation. A give and take. A sharing of company news, yes. But also a place for sharing good information from other companies. From followers. It’s a place to answer questions…and to ask them. It’s a place to allow some personality to show, including the personalities of the social media manager and company leadership and employees. It’s a place to engage and build relationships. And this is just as true for a Fortune 500 company as for the mom-and-pop deli on the corner. Social media levels the field, and looks for the people behind the brands.

So now about your social media marketing….

It’s crunch time. Five little things. How many of them did your company do on social media? How many did you miss? If you’re at that crossroads, instead of heading away from millions of prospects online daily, are you ready to take the other fork now? You now have a map. Just take a step.

Article/Tutorial|Comments Off on Is your B2B company at a social media crossroads?